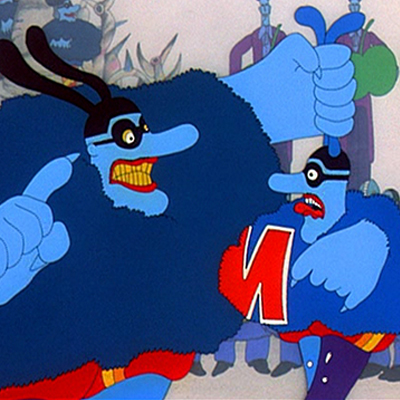 Heinz Edelmann was born in 1934 in Czechoslovakia. Between 1953 and 1958 he studied at the art academy in Düsseldorf, where he also worked as a teacher later in his life. Even when he was just 30 years old he was considered one of the most perspective designers in Europe. His career started when he illustrated a German avant-garde magazine named Twen. He also illustrated for the magazine Schule. The illustrations in that magazine strongly resemble illustrations by Edward Lear. He also illustrated children’s books in which he infused the spirit of 19th century illustration with crosshatching and dynamic long stepped characters. In the 1950s he made adverts for the Putz agenize and worked as a teacher. He lived in Germany, England and the Netherlands.

Heinz Edelmanns most known work is undoubtedly the animated movie Yellow Submarine for the Beatles. The Beatles were contractually obligated to make 3 movies. After they made the first 2 they didn’t feel like making another one, so making it in to an animated movie made sense.

In the 1960s Edelmann experimented with neo art nouveau that was stylized and fluid. That attracted the attention of the film makers. Edelmann became the scenographer; a lot of his illustrations actually shaped the movie. He would often make up new characters, like the Blue Meanies and economic ways of doing certain sequences with which he created a unique way of expression. The movie premiered in 1968. The kids liked it because of the colors but it was also a commentary of the 1960s. He depicted psychedelic scenes, even though Edelmann stated, that he was never under the influence of illegal drugs.

The movie was so successful that Edelman is credited as being one of the first people that elevated animation to an art form and inspired other animated features like Fritz the cat. The movie was a precursor to modern music videos, especially with the use of dancing typography. The letters, that shaped the lyric “Love is all you need”, transform in to a blinking blinking tapestry pattern.

Heinz about the movie

Edelmann said about the film: “In those days no one knew if an animated movie not done by Disney studios would work, because all other animated features sunk the studios that produced them. History of animation was a history of failing studios under the weight of animation and the big question was if we could even make it. Immediately I thought this should be a series of connected short films. The style needs to change around every 5 minutes so it holds your interest ‘till the end. That worked and I think that’s why the Beatles are so timeless today. That premodern innocence and the fact that they were the first modernist pop musicians, that combined pop with modern styles and classical elements like a collage. At the same time they had an innocence, that other rock and roll bad boys didn’t have. That is the quality, that people still like today, not just in their music but also in our animated movie.”

Sick of the Beatles

When the movie was finished, Edelmann was worried he would be forever connected with the psychedelic scene, with which he didn’t associate himself. That’s why he turned to seemingly darker themes and styles, that were probably more ironic than dark. He also illustrated the first German edition of J.R.R. Tolkien’s Lord of the Rings.

In the 1970s he moved to Amsterdam and designed posters for plays, movies and book jackets. He used the same style in the book Andromedar DR1 (1970) as in Yellow Submarine. The story was about a journey to Mars.

In 1989 he won a design competition for the ’92 Seville Expo mascot in Spain when he illustrated a bird with a rainbow colored tail and conic beak. He worked as a professor at the State Academy of Art and Design until 1999 when he became the professor of illustration at the art academy in Stuttgart.

Edelmann was known as a successful advert illustrator and editor in Germany, England and the Netherlands, especially for combining impressionist and expressionist sensibility infused with intelligence, humor and irony. He developed a recognizable graphic style that influenced a lot of artists in Europe and America.

He is justly considered as one of the biggest contemporary artists of his generation. Edelmann put his characteristic visual language above the passing trends and fashion. One of his contemporaries Milton Glaser from New York said: “To think of him in terms of the Yellow Submarine is to really parochialize his talent. He developed since then, and his work has changed. I know that he would like to forget about the Yellow Submarine that was so pervasive in his life, and he’s gone on to do many, many interesting things.”