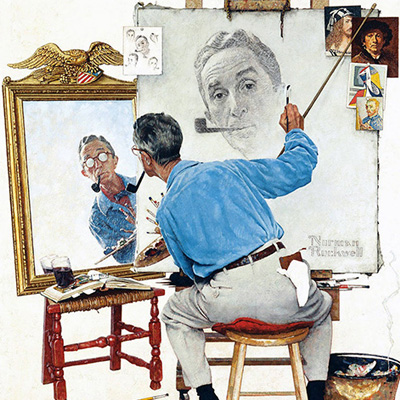 When talking about illustration in North America, Norman Rockwell is the first person that comes to mind. There he is not just very beloved illustrator but also a very beloved artist in general. In the span of his 60 year career, he illustrated post cards, commercial posters, calendars and produced more than 300 magazine covers for the, then very popular publication, Saturday Evening Post.

Rockwell was born in 1894. He is famous for his illustrations of an idyllic world, innocent childlike playfulness and humorous content even on illustrations featuring serious topics. That approach made him very popular but brought on some opposition as well. Some thought that he is faking America, because his illustrations are to sweet and old fashioned considering the time period he worked in.

The thing is… The source of his vision of America was probably his childhood. His father Waring had a great influence on him. He would often pass the time in the evening by copying illustrations from magazines. Norman would often join him. The atmosphere created by his father’s presence, the light of the lamp that radiated warmth and the quiet, intimate, domestic atmosphere created a homey satisfaction that influenced Norman’s later works.

From 1907 onward Norman’s family lived in Mamaroneck, New York. There Norman enrolled in various art schools and courses. His mentors included William Merritt Chase, Charles Hawthorne and Thomas Fogarty. In those days Illustrators were very exposed in media, since the American market was aware of the importance the propaganda and illustration content of publication. Norman decided to pursue this career of creative and commercial production. In his whole career there is not a single piece of art that wasn’t intended to advertise, propagate or inform.

Thomas Fogarty is to thank for Normans professionalism. He taught his students the importance of dead lines, the client’s wishes and to respect dedication. Thomas also found small commissions for his students with smaller, less popular publications. He got Norman his first job as a production designer for the publication Boys life. This also marked Normans first collaboration with the Boy Scouts od America. An organization he admired and collaborated with throughout his lifetime.

In 1916 Normans career blossomed when the editor for Saturday Evening Post chose one of his illustrations for a cover. He chose the illustration Boy With Baby Carriage. The illustration show a boy dressed in his Sunday suit pushing a baby carriage. He has a baby bottle in his pocket. On his way he meets two of his peers, most likely on their way to play. In contrast they are dressed in baseball uniforms. A sarcastic smile can be sensed on their faces, hence the boy pushing the carriage facing away because he is ashamed. His chore doesn’t seem manly to them and is to them worthy of a chuckle. Despite the obvious cruelty of the two boys, making fun of their peer, we can sense a childlike innocence and naivety in the story, that echoed in Normans works throughout his career.

Photos, yes or no?

Back in those days a lot of artists were hiding the fact they used photographs as references. Later in life Norman never hid the fact but in his earlier life he rather used live models. Later he stated that photos should only be used as references by seasoned artists that know how to paint outstandingly even without them. Norman’s use of live models filled his works with the sense of a regular, average American citizen. He often used people straight from the street and that only reinforced this notion. He was successful in creating a world, where an indigenous pilgrim could be portrayed by an old, grumpy newspaper salesman from the corner.

Despite his idealized American scenery, Norman often illustrated ironic, critical and political themes. One of his first such illustrations is The Ticket Seller (1937). The man sitting behind the counter looks like a prisoner. Post cards are hanging all around him, yet he is symbolically imprisoned by the steel bars, that represent his mundane and boring work.

The crisis and the World Wars

In 1929 America was struck by the economic crisis but that didn’t really phase Norman at all. By 1930 he was already one of the most famous illustrators in America and almost single handedly prolonged the golden age of illustration. He painted commercial posters and adds for brands that started to spread across America. During the 1st world war he strictly avoided motifs of blood and violence. On the verge of the 2nd world war though, he thought that dressing up his models in uniforms and embellishing the real state of things isn’t genuine. He decided to portray the war as it actually is.

His most resounding work of this period is his series of illustrations called The Four Freedoms. He had already been painting for the Post for 26 years and he started to doubt in his abilities. He wasn’t sure if he could paint an illustration that wasn’t commercially inclined and had an important and universal meaning.

The Four Freedoms were inspired, by the singing of the Atlantic Charter. He thought the charter was composed too noble for an average American to understand, thus he wanted to make it simpler. He wanted to bring the message closer to the people with everyday tasks and moments, they experienced as only he could.

The four piece series – Freedom of speech, Freedom from fear, Freedom from want and Freedom to worship – became a symbol and icon of America during WW2. It shows people everyday people in such a way that Norman crossed the bridge between incomprehensibility and created a greater connection between the viewer and the image itself. Norman offered the painting to the office of war information for free but they wouldn’t take them, stating the illustrators aren’t real artist. His savior was the Saturday Evening Post that printed his illustrations on bigger formats ready for framing and enclosed them in their publications.

Symbol for women all around the world

During the war Norman kept painting for the Saturday Evening Post but from then on his experience from the Four Freedoms echoed in his works. One of his most important works is the cover illustration Rosie The Riveter. Rosie wasn’t a new concept and has been done before by other illustrators for a couple of years but Norman succeeded in elevating the figure to such a height, that she is still used as a the most important symbol of the women’s work force all around the world more than 70 years later.

With this work he honored the women that took on the jobs of men were serving in the war. There is a half hidden halo of wire above Rosie’s head that clearly represents the importance and gratitude towards women that played their part in the war effort. She is standing on a copy Hitlers book Mein Kampf, symbolizing the domination and power. The woman is portrayed very stocky and muscled, that symbolizes her independence and strength.

Photos start to take over

After WW2 photographs started taking over and illustration was the popularity of illustrated covers and adds dropped. Modern photos became popular and to some extent more honest than Normans idealistic illustrations. The whole illustrative community was affected so they gathered and organized to save the tradition of illustration. As a leading America illustrator, Norman contributed in establishing the Famous Artists School, Inc. It opened its doors in 1947 in Westport, Connecticut. Famous artist would evaluate and correct artwork of young illustrators via correspondence. The also wrote manuals and guides on how to illustrate and design a good cover.

Around this period Norman started using photos as references for his more complicated compositions. With this he entered his period of most detailed work, that also echoed the thought in regard to illustration and it’s value as art. His compositions became more and more complex and spoke of the nature of art and modernist vocabulary in the guise of an inoffensive genre. Now his infinite knowledge of clear expression was equaled with and ecstatic ambition of his compositions.

A good example of this is The Soda Jerk (1952). The soda jerk is leaning on the counter that is seemingly rising vertically instead of going deeper in to the space and is flirting with the young girls. The tiles on the floor are placed in a way that it seems that Norman didn’t follow the basic rules of linear perspective. With these kinds of compositions Norman sailed in to abstract territory even though the subject wasn’t particularly artsy.

His skills outgrow his work

Despite all his efforts Norman was still having dilemmas as a commercial artist. His skills grew to the point that it was a waste for cutesy, sweet and funny vignettes that society was expecting of him. His work April Fools breathes in a sense of secrecy, a disturbing surrealistic half conscious that there is something wrong with Norman or the society he was working in. After almost 50 years at the Saturday Evening Post the leading staff changed and they treated Norman like an amateur. They made corrections to his illustrations without his knowledge and consent or even fully rejected his motifs.

At the time LIFE magazine was on the rise and it was proving that illustration is not important for a magazine to succeed, since photos were the new norm. Despite all this most critics agree that Norman created his best work in this period. The cover illustration named Shuffleton’s Barbershop (1950).

“Every square inch of the painting, from magazine and comic book covers in the stand near the window to the left over poster from WW2 on the wall and the fisherman’s creel stored on the shelf, was carefully studied and done to perfection.”

Everything in the painting is presented with the same level of intensity, something that doesn’t appear in scenes like this. The viewer’s eye sharpened every corner of the painting without blurring anything. We could almost describe it as renaissance illusionism. We view the scenes through the window that is the first plain. Behind it is the barbershop that is the second plain and behind even that is the back room as the third plain. The window frames the scene, through which we are viewing it. The light protruding through the door emphasizes and leads to the figures in the room but at the same time creates a warm and domestic feeling in contrast to the shadows.

After almost 50 years of work for the Saturday Evening Post, Norman stopped working for the publication. He found his niche with Look magazine. He created his most famous cover illustration for Look titled The Problem We All Live With (1964). It sums up the story of an African American girl named Ruby Bridges that despite racial segregation in New Orleans crossed the threshold of a whites only school. In front and back of her we can see American marshals that are escorting and protecting her from the furious mob. There is a stain on the wall as a result of throwing things at her and that only sets the scene in a more intense moment. The girl is fairly smaller than her guards and that emphasizes her fragility and grace. She is dressed in a white dress that symbolizes her purity, innocence and righteousness of her actions.

This and other illustrations marked Normans activist period, something he could never achieve at the Saturday Evening Post. He defended racial equality and didn’t embellish and idealize his works anymore. He showed the cruel truth that echoed deeply in the hearts of Americans. After 10 more years at Look, Norman’s health deteriorated. His arms started shaking and his eyesight dwindled. Even though Norman still worked every day, the level of professionalism he was known for was impossible to achieve anymore.